Here are some pictures and videos of my own personal sessions...

A game played with 4 young ladies from ages 9-13.  Their reactions, ideas and role playing were AMAZING!

An example of an IMPROV moment during a game of Call of Cthulhu.

The players were trying to research information on a company and one player decided he would be able to find someone that works or worked within the company in order to get some 'dirt' on them. We figured a good place to start was the financial department, which led to this.

Of course there was no such character in the book as written so what follows is a completely spur of the moment creation that led to a memorable moment at our game session.

A recent game played with two 11 year old boys. They ran their characters through a tricky dungeon crawl, ending in a cliff hanger with one PC injured at the bottom of a spiked pit trap.

The reactions were priceless. Unfortunately one child had video issues but nonetheless we all had a blast! 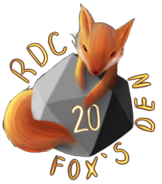 DnDnG: A Short Documentary from Meredith Jacobson on Vimeo.

A sample with various clips taken from a recent game with some young 13 year old girls who were playing the game for the first time with me. 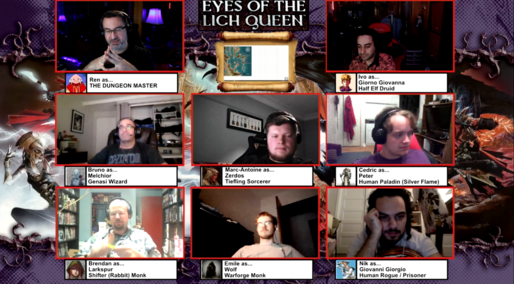 An example video showing where new players would be placed on screen.

This is the 'Format' in which I will present the session to everyone with your faces above your names.

Note: these sessions ARE NOT streamed publicly. They are 100% private.

An example image of a game session of me playing D&D with some friends.

This is the 'Format' in which I will present the session to everyone with your faces above your names.

Note: these sessions ARE NOT streamed publicly. They are 100% private.

Check out “DnDnG: A Short Documentary” from Meredith Jacobson on Vimeo.

For any parent that has a girl who wants to play D&D or if you want to get her to play!